This article is a stub. You can help Jewel Pet Wiki by expanding it.

Jewelpet (ジュエルペット, Juerupetto?) is a 2009 anime series based on the Jewelpet franchise by Sanrio and Sega Sammy Holdings. The series is animated by Studio Comet and was aired from April 5, 2009 to March 26, 2010 on TV Osaka and TV Tokyo.

In the magical place called Jewel Land, the magicians turned the Jewelpets into their Jewel Charms so they can travel to the magic forest but with the exception of Ruby, a white rabbit who likes to goof off. But then a strong wind blew the stork and the jewels were spilled, scattering them across Takaragaseki City on Earth. Ruby, now being punished, is sent to Earth to retrieve her friends.

On Earth, a secondary school student named Rinko Kougyoku is on her balcony observing the night sky and saw a group of shooting stars and one of them falls into her water glass to become a red jewel. The next day she and her friend Minami Asaoka were saved by a guy named Keigo Tatewaki from a jewelry store robbery. He then explained to them that he's working from a special organization which is linked to the magicians of Jewel Land and told them about the Jewelpets. As Rinko awakened Ruby, and then met Aoi Arisugawa later on, It's now their task to gather all the Jewelpets together back to Jewel Land before an evil Jewelpet named Diana gets them first.

As the series progresses, the main heroines uncover new Jewelpets on their way. But at the same time, Dian; another Jewelpet who can use Dark Magic, awakens from his crystal prison by his sister Diana. And now the heroes will face him and the havoc and chaos he will cause in both Jewel Land and the Human World.

Ruby: Ruby is the main Jewelpet of the series and one of three main Jewelpets. She is Rinko's partner who symbolizes courage. She is a Japanese hare, who is very joyful and a troublemaker. She is ranked Acrylic Class due to her magic, which has a 1% success rate and can cause bad luck and explosions if it fails, but later in the series, she learns to do her magic by Labra. She also has a crush on Tour. She is one of three Jewelpets with mini-Jewel Stick with Sapphie and Garnet. She meets Rinko when she flies into a cup on water, but is actually revealed outside when Tatewaki explains what Jewelpets actually are.

Rinko Kougyoku: Rinko is the heroine of the series and Ruby's partner. Rinko is timid but determined, she is a normal junior high school girl. Her life changes when she meets Ruby, who has been assigned the mission to find the lost Jewelpets on Earth. She has the Jewel Stick, therefore she can use the magic with the spell "Kirapikarin" to awaken a Jewelpet from their Jewel Charm state. In episode 16, Rinko met Akira Nanase, her neighbor, and usually hates it when he treats her badly. In the later episodes she shows signs of falling in love with him, which later ends up with the two becoming a couple. After she met Andy, she started to fall in love to him, despite being told that Andy is not an actual prince. After she knows that Dian is Andy, she still shows feelings to him and tries to stop him from destroying the city.

Sapphie: Sapphie is one of three main Jewelpets and Aoi's partner who symbolizes friendship. She is a Cavalier King Charles Spaniel who is responsible, friendly, calm and understanding of everyone's feelings, She is very supportive towards Aoi. Sapphie meets Aoi at the airport, where she was crying and feeling lonely because she doesn't have any real friends, but when they meet and become friends, her feelings changed.

Aoi Arisugawa: Aoi is one of three main characters and Sapphie's partner. Aoi is calm with a gentle heart. She has always wanted to have a real best friend, which made her feel sad and lonely. When Aoi accepts to become Minami and Rinko's friend, she grows happier. Aoi has a crush on Naoto Sakuragi.

Garnet: Garnet is one of the three main Jewelpets. She is Minami's partner who symbolizes love. She is a Persian cat, who is very girly and fashionable. She is often sarcastic and tends to act haughty towards people she deems inferior but she hates it when someone insults her friends. Garnet's magic skills were in the "Glass Class" ranking, on which her magic can have a success rate of 50%. Garnet meet Minami when she was crying because she doesn't know how to confess her love to Hisashi Miyamoto.

Minami Asaoka: Minami is one of the three main humans characters and Garnet's partner. Minami is Rinko's childhood friend, She loves the color pink, but she does not tell anyone except Garnet, and she has a crush on Hisashi Miyamoto.

Diana: Diana is the main antagonist of the series, before she awakens Dian, her older brother. She is a Munchkin cat, who is very sneaky and dislikes bananas, and is so cruel to the Phantom Herb Thieves. She is shown to be kind in a couple of episodes, though.

Dian: Dian is the main antagonist in episode 33 onwards. He is a Maine Coon cat who symbolizes self-control, Thousands of years before the show, he started a rebellion against humans, because he thought they didn't deserve the Jewelpets' goodwill. He was defeated by the Four Great Magicians and imprisoned in ice. When he is released, he plans to avenge himself. He turns into a human prince called Andy Samael in order to seduce Rinko into handing him the Jewel Stick. He also forms the Jewel Eight. At the last few Episodes, he turns into Dark Dian by losing his self-control and was helped by all of the Jewelpets.

Akira Nanase: Akira Nanase is Nephrite's human partner and Rinko's neighbor. He also knows a lot of English, which he sometimes shows it off in front of Rinko. Even though he brags sometimes, he has a secret crush on Rinko and hates Dian/Andy for how he influenced her. In Episode 52, he and Rinko were about to kiss in the end, but got interfered by Ruby and Nephrite.

Keigo Tatewaki: Keigo Tatewaki is Flora human partner and secretary to the prime minister and is dispatched by the secret services to deliver the Jewel Pocketbook, entrusted to them by Raku Majo, to the person that has Ruby's Jewel Charm. He finds Rinko and is tasked with watching over her progress, as well as finding Diana and Dian so their plans can be foiled.

Raku Majo: Raku Majo is unexpectedly relaxed and even irresponsible for someone with such a high position in the hierarchy of Jewel Land. She is rather lazy and tries to deposit all the responsibility of retrieving the Jewelpets in the shoulders of humans, though this could also hint at her trust in humanity. She is the leader of the Four Great Magicians and ruler of Jewel Land. Her symbolic color is pink. She is in direct contact with the prime minister of Japan in their mission to bring the Jewelpets back to Jewel Land. She also keeps in contact with the owner of the Jewel Pocketbook, who turns out to be Rinko. She gives advice and expounds on the history of Jewel Land when needed.

Raku Majo, with her colleagues, defeated Dian and Diana when they attempted to start a rebelion against humans.

Ryouko Azabu: Ryouko is one of Aoi's Entourages and Prase's human partner. Very serious in nature thought sometimes lightens up in front of Aoi, Ryouko is also very supportive towards her little sister. She is also a member of the school's Radio Club.

Megumi Hiroh: Megumi is Ryl's human partner and caretaker and also one of Aoi's Entourages. At first she was jealous because the others got Jewelpets and she didn't. When she got her Jewelpet Ryl, she didn't like her because she thought she wasn't cute and only wanted a cat as her Jewelpet.

Tetsuya Asaoka: Tetsuya is the twin brother of Hiroshi Asaoka, they both are Little brothers of Minami and Tour partners.

Hiroshi Asaoka: Hiroshi is the twin brother of Tetsuya Asaoka, they both are Little brothers of Minami and Tour partners.

Ki Majo: Ki Majo is the first of the Four Great Magicians, who represents happiness and joy. Her symbolic color is yellow.

Do Majo: Do Majo is the second of the Four Great Magicians, who represents anger and rage. Her symbolic color is red.

Ai Majo: Ai Majo is one of the Four Great Magicians, and represents sadness and pity. Her symbolic color is blue.

Jewelpet had its first international broadcast on YoYo TV in Taiwan on February 21 of 2010, nine months after the first series premiered in 2009 in Japan.

The anime later aired in both Spain's Telecinco and Boing (as well in it's programming block) and in France's Télétoon+ (also known as Teletoon France) on April on the same year, one month after the anime ended during Japanese broadcast; It also aired 3 months later in Hong Kong, China on TVB Jade on July 9th and one month later in South Korea on Jei TV, Daekyo Kids TV and the Korean version of Cartoon Network during that same year. In Thailand, the anime aired on True Spark also in that year.

Later, the anime aired in Portugal on Canal Panda on New Year's day of 2011, as well as in Italy's Italia 1, Hiro and the italian version of Boing on 12 February of the same year, The anime was also broadcasted on GMA Network in the Philippines on November 20, 2011. In Vietnam, it was broadcasted on Saotv around that year. A year later, Jewelpet was broadcasted on Spacetoon in Syria and aired on TV Barrandov in 2012 and TV Prima in 2014 in Czech Republic. In Greece, it aired on Star Channel on 31 March, 2013.

Jewelpet also aired in Russia on the channel Gulli. In Indonesia, the anime aired on WakuWaku Japan. Both countries have unknown premiere years of the show.

Official artwork of the season. 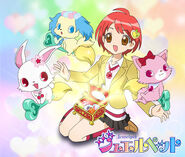 Rinko and the Jewelpets with their Jewel Stick.