Jewelpets (ジュエルペット, Juerupetto?) are magical "pets" who live in Jewel Land. In the official setting, they were given birth by the Princess. In the anime, they are ruled by their queen and creator, Jewelina (Raku Majo in the first series). They are known to partner up with humans and work with them on finding magic jewels and accomplishing magical quests.

The Jewelpets are magical beings based on various animals, mostly domesticated species. Their stature is generally very small, though most Jewelpets are only slightly taller than an adult human's shin.

Most Jewelpets can stand and walk on two legs and use their forepaws to grab or hold things (despite not having any visible fingers), even if their real-life animal counterpart is incapable of such. Even so, some Jewelpets prefer going on a four-legged stance as a means of locomotion and/or transportation. The most notable examples of this are Angela and Opal, who usually walk on all fours.

Jewelpets are omnivorous like humans, independently of their species. They can additionally eat human-processed food without ill effects, but suffer the same health problems if they abuse one type of food.

All Jewelpets are rational animals, and their level of intelligence has the same range as those of humans. They are also all capable of human speech, albeit with a few exceptions (such as Rald or Tata).

Each Jewelpet's eyes are made of one mineral, after which they are named (with the exception of King, who is not named after his mineral, onyx). These eyes are called Jewel Eyes, and they are what gives Jewelpets their magical power.

There are canonically 42 Jewelpets in total, with the majority of them being female (currently at 23 with 19 male Jewelpets in gender ratio).

Jewelpets are rational and social animals. When left to their own devices, they will construct a society very similar to those of humans, which includes education and entertainment. They also have mindsets similar to humans but in a more simplistic and childish way due to isolation from the human world.

It is stated in some series that Jewelpets are meant to be partnered with humans. When a Jewelpet and a human form a bond, it increases the pet's magical power and the human's quality of life.

All Jewelpets have the ability to cast magical spells through their magic Jewel Eyes. Magic is casted through a verbal incantation (one per Jewelpet) and movement of the body. The verbal spells used to summon magic vary from each series. In addition to this, sometimes a Jewel Pod is required to cast magic, such as in Jewelpet Kira☆Deco! and Jewelpet Happiness. All Jewelpets are theoretically capable of performing basic spells such as moving objects or transformation. Each Jewelpet also has additional specialized abilities that are connected to the trait they represent (Luck/Courage for Ruby, Love for Garnet, Friendship for Sapphie, etc.).

All the Jewelpets during the airing of the first series.

All the Jewelpets during the airing of Jewelpet Happiness.

Nameless Jewelpets from the epilogue of Jewelpet Sunshine. 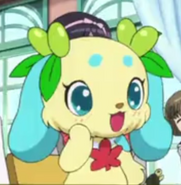 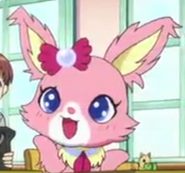 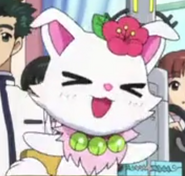 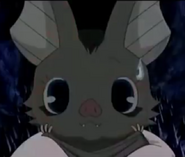