View source
watch 01:36
We're Getting Mutants in the MCU - The Loop
Do you like this video?
Play Sound

Jewelpet Magical Change (ジュエルペット マジカルチェンジ, Juerupetto Majikaru Chenji?) is the seventh and currently the final anime series based on the Jewelpet franchise by Sanrio and Sega Toys. The series is produced by Studio DEEN, now handling official production of the Jewelpet anime series. The series is directed by Nobuhiro Kondo and written by Masahiro Yokotani.

The Jewel Castle has lost all its magic and falls from the sky and in the middle of a rural human town. The Jewel denizens learn that the humans have lost all interest in magic. To restore their belief in magic, Jewelpets transform into humans to study more about them.[1]

The series follows the adventures of Ruby and her long-best human friend Airi Kirara as they embark on a quest to spread the magical wonders to the humans around the world.

Jewelpet: Currently On the Run

At the end of every episode, there is a short segment telling the story of a mob-like organization led by Labra, who wants to take away positive feelings from the world. She endlessly chases Ruby, who refuses to take part in the organization.

The anime was first revealed at the 2015 Winter Wonder Festival in Japan and later confirmed in the March issue of Shogakukan magazine Pucchigumi. The April issue of the same magazine also confirms about the show's new concept, this time revolving around the Jewelpets now able to transform into humans (Moe anthropomorphism) through special magical means, which plays the essential point to the anime's storyline. This anime marks the return of its magical girl theme after five years since it's second installment Jewelpet Twinkle☆ in 2010.

The anime is directed by Nobuhiro Kondo, the director of Nobunagun, while the writing is handled Masahiro Yokotani, who worked on Free! and Free! - Eternal Summer. The entire anime is handled by both Studio DEEN for the animation and TMS Entertainment for the licensing, making it their first time handling the Jewelpet anime and the second time to be handled outside of Studio Comet.

Most of the voice actors from the previous Jewelpet series return to voice the Jewelpets as usual. However, there were some minor changes to the casting.

Sapphie and Garnet were recasted as minor side characters, and the main Jewelpets, other than Ruby, were replaced with Labra, Luna, and Larimar instead. Although Garnet and Sapphie appeared later on and both Aya Hirano and Nozomi Sasaki reprised their respective roles as usual, Ruby's voice actress, Ayaka Saito, said on her blog that she was sad for the absence of Garnet and Sapphie and her voice actresses, stating that it was a "sad farewell due to behind the scenes circumstances".

The 4-idol group Dorothy Little Happy confirmed, on March 16, that they will sing the ending theme song for the anime, to coincide with their 5th Anniversary tour in Japan. a 30-second promotional video has been uploaded to YouTube by Sega Sammy's subsidiary TMS Entertainment with Sanrio's and Studio DEEN's permission.

On April 3rd 2015, the day before the anime even started it's run, there was a special live event held on Sanrio Puroland in conjunction with the new series' launch. The group Dorothy Little Happy and the main voice actors were present in the event as the fans viewed the first episode.

Ruby's voice actress Ayaka Saito herself, stated on her blog that the anime will run for 39 episodes, rather than 52 episodes as does the previous series. The reason for this is unknown.

The anime premiered on April 4, 2015, and ended on December 26 of that same year, on all TXN stations, including TV Tokyo and TV Osaka at 9 a.m on Saturdays.

On December 31, Ayaka herself announced on her blog that she would leave Vocal Cooperation and then transfer to Remax to work on other animes, making Jewelpet Magical Change the last Jewelpet series where Ayaka voices Ruby. She did voice Ruby in both of the Rilu Rilu Fairilu crossover episodes since that announcement, so there are rumors that this announcement is not true.

During the press conference of the anime, the singer, misono, stated that she was able to get the role for Luna through a fair audition, despite her announcement of retiring in the media business, she was happy to be the part of the cast.[2]

However, the fans became enraged and began sending hate mails against her.

Rumi Shishido herself was aware of this situation and also shocked by it. She said in her tweet that she was not informed that there was even an audition to replace her, or even the fact that she had been replaced. Although, she told to people to stop attacking her and to clean her name.

On April 14, 2015, misono did an update on her blog and made a public's apologies to the fans and Rumi Shishido, stating that "I said [I got the role] due to 'talent' and 'my own strength,' but I was wrong... It's 'thanks to the staff...' I'm so sorry." She also stated that she was very happy about her debut to an anime that she couldn't stop thinking about herself and that she never wanted to make a situation in which she "stole" someone's role or work. She went on explaining that she had been receiving some hate mails and even multiple threats of "die" and "commit suicide" online due to the change. however, she did note that she wants to hear their opinions, advice, and feelings about her acting during the show from parents, and assured viewers that she would not ignore their voices.

It had its first broadcast outside of Japan in Thailand on True Spark JUMP, though the year of its premiere is unsure. 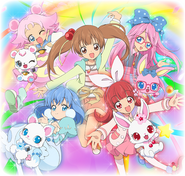 Airi and her jewelpet partners' picture from TV Tokyo site.

Introduction in a magazine. 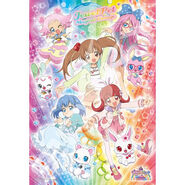 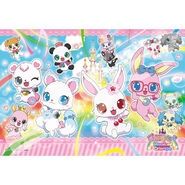 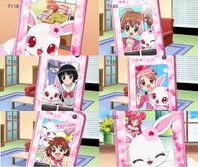 Labra encounters some others Sanrio characters.

The memory of Ruby & friends.

The memory of the main mascots. 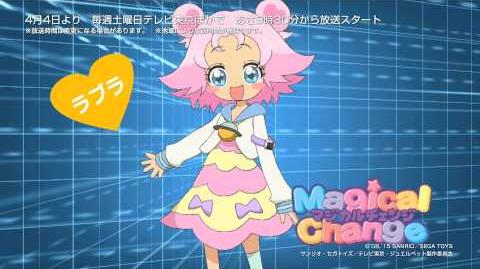 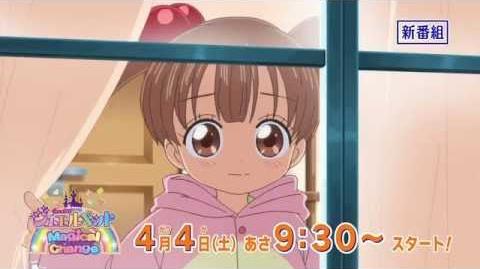