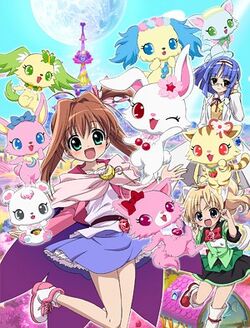 Akari Sakura meets a white Japanese hare named Ruby while on her way to school. As it turns out, Ruby is not an ordinary hare, but a Jewelpet; a creature with eyes made of precious gemstones that possesses magical powers. Ruby takes Akari to Jewel Land and she became her magic partner. After that, Akari decided to enter the Jewel Star Grand Prix to become the next "Jewel Star", where the prize for being awarded the title of "Jewel Star" is being granted three wishes.

Akari Sakura (桜あかり Sakura Akari) - Akari is the main character, being a girl 11-12 years of age and in sixth grade. She weighs 44 kg and is 153 cm tall. She is the human partner of Ruby and Labra and is the younger sister of a famous girl named Monica Sakura. She wants to be friends with everyone, but is often too shy and embarrassed easily. She is the best friend of Miria and Sara. She has a crush on Yuuma, a student in her middle school class and twin brother of Alma.

Miria Marigold Mackenzie (ミリア・マリーゴールド・マッケンジー Miria Merigorudo Makenji) - Miria is Garnet and Sango's human partner. She is an American girl who lives in Hollywood, loves watching cartoons and dressing up as a cat. She considers herself as a "KMB" or "Kanzen Muketsu Bishojo" (Knockout Marvelous Beauty). She has a crush on Leon. She often brags about her magical skills.

Sara (沙羅 Sara) - Sara is Sapphie's human partner. She is a half-Japanese and half-Indian girl who is a genius prodigy that likes science, especially chemistry, physics, and inventions. She is constantly reading magic books and lives away from her parents for her research, guarded by the government. She doesn't talk much, sometimes coming off as a cold-hearted person. She is an expert on using magic with chemistry and magical physics. While she is smart, she has a fear towards mushrooms and immodest clothing, sometimes causing her to panic until the problem is solved. Both Nicola and Miria think she's weird, but Akari thinks Sara is a nice person inside, although she doesn't show it. She and Nicola are rivals due to their knowledge of magic, but this was since then set aside.

Alma Jinnai (神内アルマ Jinnai Aruma) - Alma is Diana and Opal's human partner and the series' main antagonist. She is disguised as a mysterious male figure at first until it is revealed that she is a girl. She attempts to acquire the forbidden spells of Battest, which she believes will awaken her mother, who was locked into an eternal sleep by Jewelina. This causes chaos to happen in Jewel Land, and Akari must stop her from destroying the world. She is the twin sister of Yuuma.

The development of the anime started in late 2009 during the airing of the first series, So Sanrio asked Studio Comet to make another series with a new and fresh storyline. During the development, The series would go through some changes, the schedule of the anime went from Sunday to Saturday and also, the anime would also receive its air on not only TV Tokyo and TV Osaka, but also on TV Aichi, TV Hokkaido, TV Osaka, TV Setouchi and TVQ Kyushu Broadcasting Co., Ltd although the airtime remains the same.

There has been newer concepts for Twinkle such as the use of Jewel charms as magical items, a different takes on casting the magic spells on both the Jewelpets and the humans, and introductions to newer character designs that fits the storyline. Also, the second anime is more of a reboot to the series, rather than a sequel to the first series, but it does reference some concepts from the previous one. Twinkle uses heavily the concept of the magic academy, where the humans study with their Jewelpets to become full pledge magicians while incorporating things related to real life schools and academies and is heavily magic-oriented but a more serious story-wise.

For the locations, the hometown of Akari is based on the town of Hayama Kanagawa.[1] the production's staff went to that place and used it as the inspiration for the anime's setting. Those locations in Hayama were recreated and were included in the anime such as the bus stop near the coast of Hayama and the staircase leading to the Hayama Imperial Villa. Other locations in said town are also recreated in the anime like the Morito beach, the place where Akari and Ruby first met in the first episode of Twinkle, Ruby and Akari Doki☆Doki!.

The staff from the previous series, were brought in to aid the productions of Jewelpet Twinkle, Including three people who worked previously from the anime adaptation of Nanatsuiro Drops such as the screenwriter Michiru Shimada of One Piece and Dr.Slump animes, the character designer Yukiko Ibe and the director Takashi Yamamoto, the animation director of the original Pokémon anime.

Jewelpet Twinkle began airing on April 3rd, 2010 and ended in April 2nd, 2011, the series was an instant success on both sales and ratings, it became the first Sanrio anime series to have a successful reception on all target demographics.

Although Twinkle ended it's run after 52 episodes, on July 21, 2013, an OVA was made, which the fans refer to it as the fifty-third episode. The OVA was made by both Studio Comet and Studio Zexcs, making it the first time that Comet co-produced the program with Zexcs and also the first time where the animation for a Jewelpet episode was done by Zexcs, the studio would go on animate Lady Jewelpet entirely. The OVA was included alongside all episodes of Jewelpet Twinkle on the Blu-Ray box-set.

Moreover, before the OVA, the first original animated feature of the anime was released on January 16, 2012, which is a newly animated music video of the opening theme, Happy☆Twinkle (short version), being a part of Twinkle's second fan disc series Fandisc F.

On November 1, 2017, the Jewelpet Twinkle Twitter page announced the third original animated feature will be made as a part of the anime's fourth fan disc series Fandisc S (including 12 selected episodes and the previous OVA, in the form of Blu-Ray) for celebrating Akari's 20th birthday in 2018.[2] On February 28, 2018, the page first revealed the production of the animated feature.[3] It is said to be a newly animated music video of the ending theme, Scribbling at the Sky (full version).[4][5] The fan disc series was released on July 22, 2018.

Jewelpet Twinkle☆ started its first broadcast outside of Japan in Spain's Boing channel on April 30, 2011, 28 days after the anime ended its run in Japan. It did not air the last 12 episodes and only 26 were put out on DVD.[6] Said last 12 episodes were released on Pluto TV on January 17, 2022, almost 11 years after the show's original Boing broadcast.[7]

In Indonesia, it aired on WakuWaku Japan in the year of 2014. 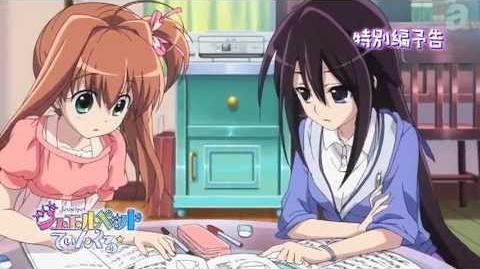 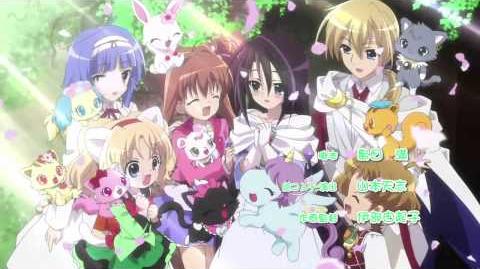 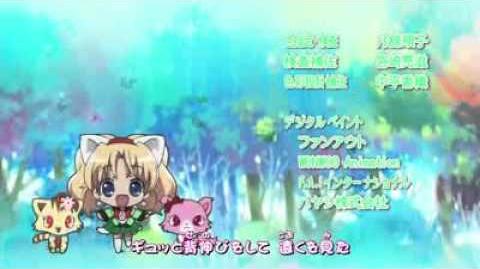 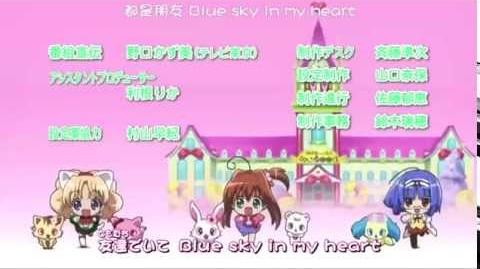