Ruby (ルビー, Rubī?) is a female Japanese hare Jewelpet who represents Luck or Courage, and one of the three mascot characters of the Jewelpet franchise. She is every main protagonists' partner among all of the Jewelpets in each series and the very first Jewelpet in the roster overall. She is also the most notable icon of the franchise.

Ruby is a white Japanese hare with pink inner ears. Her Jewel Eyes are made out of red rubies. For her attire, she wears a pink cherry blossom flower around her left ear with a red star in the center of it and a pink pearl necklace with a pair of red cherries around her neck.

Ruby's Jewel Charm is oval-shaped. It is red in color and has an embedded heart-shaped ruby with four ruby crystals surrounding it. It is also decorated with white gold lines. The white gold changes to pure gold when it's powered up in the final episode of the first series.

In Ruby's human form, her appearance is a youthful girl. She has white skin and red eyes. She has red medium length hair and wears a thin pink headband with her signature cherry blossom flower ornament with a white large kerchief attached to it. She also wears a light pink unbuttoned seifuku jacket with side pockets and a white shirt with a pink folded collar. She wears a pleated pink skirt, white long socks, and pink shoes. Her shoelaces resemble Ruby's signature cherry necklace.

According to the official website, Ruby is depicted as polite and tidy who loves to watch the cherry blossoms bloom.

In Jewelpet, Ruby is very air-headed, joyful, brash, happy and a big troublemaker, who sometimes wants to go her own way, despite being told to stop at one place. She also acts like a little sister to her partner Rinko Kougyoku, but sometimes has a hard time handling her antics. Despite all of this, she and Rinko always settle their differences and help each other out.

In Jewelpet Twinkle☆, Ruby is a supportive type for the series' human protagonist, Akari Sakura. She is a curious and cheerful character who thinks positively. She also acts as Labra's older sister. Even when in the harshest of situations, Ruby would do anything to help Akari and never leave her alone. Unlike the first and later series, she has a really kind and sweet personality, contrasting her dumb and airheaded characteristic.

In Jewelpet Sunshine, Ruby has a more similar personality to her first series' counterpart, but with a bit of an edge to her because of her difficult relationship with Kanon.

In Jewelpet Kira☆Deco!, Ruby owns the Kira-Kira Shop where she keeps all her prized jewels, and also where she lets Pink stay in while acquiring the Deco Stones. She is very happy-go-lucky but dimwitted who loves sparkly things, such as Saury, a type of fish, and jewel stones. Ruby represents Lucky in this series, and her magic isn't very good.

In Jewelpet Happiness, Ruby is outgoing and a happy-go-lucky Jewelpet who helps out at the Jewelpet Café Happiness along with the other employees.

In Lady Jewelpet, Ruby is very air-headed and doesn't really know how to teach Momona the right things. She can't tell when someone is insulting her and takes it as a compliment instead. When in a panic, she does things on impulse and often hurries off to do what she has to do. However, Ruby still manages to be very optimistic.

In Jewelpet Attack Chance!?, Ruby has a lazy attitude who doesn't like to get things done. She also has a huge appetite for food than she does in the first series.

In Ruby's official setting in the franchise, she represents Luck. As the Jewelpet of Luck, Ruby's magic can enhance one's luck. In Jewelpet and Jewelpet Twinkle☆, she has the power of Courage, which allows humans to become courageous and work up their courage to do something extraordinary.

In Jewelpet, Ruby is ranked in the Acrylic Class because of her magic, which has a 1% success rate and can cause bad luck and explosions if it fails. However, its reliability is varied; even after Ruby had been upgraded to Super Crystal Class by learning a new lesson of courage and had been trained with Labra to temporarily upgrade her magic in order to summon Opal, her magic still causes explosions. Ruby can also use the Jewel Pocketbook alongside Rinko to awaken Jewelpets from their charm forms.

Being one of the Jewelpets who's supposed to be turned into a Jewel Charm and transported to the Dream Forest, Ruby decided not to go to the Jewel Tower and decided to goof off in Jewel Land, despite having no idea what's happening to her friends. But as soon as she went home that night, she notices her friends were missing. With no choice, Raku Majo turned her into a Jewel Charm in the Jewel Tower and sent her to the Human World to find her lost friends, only to land into Rinko Kougyoku's glass of water that night.

The next day, Rinko and her friend Minami Asaoka go to the jewelry store to examine her charm form, but then got into a jewelry store robbery. They were saved by a guy named Keigo Tatewaki and saw the red jewel Rinko has. He then explained to them that he was working for a special organization which is linked to the great magicians of Jewel Land and told them about the Jewelpets and also told them that all of them were scattered all over town. Rinko accepted the offer on gathering all the Jewelpets back to Jewel Land and awakened Ruby using the Jewel Pocketbook. In her first awakening, Rinko convinced Ruby to cast her magic on her, to be braver. However, it ends with an explosion.

But with all the setbacks, Ruby promises that her magic will work the next day, despite the fact that she is lying to her. In a lot of unfortunate events for Rinko and her facing her fear of talking to a big crowd, Ruby decides to tag along with her while she's on Earth.

Ruby is the partner of Akari along with Labra. She also acts as Labra's older sister.

In the first episode, Ruby; a new student of the Magic Academy, is looking for a human partner, and she arrived inevitably in the Rarerare World. There, she meets Akari Sakura, a human girl with a sweet and shy personality, who is heading towards school. In their first moment, Akari is scared to see Ruby; a talking rabbit. Ruby attempts to befriend Akari, but trouble ensues. Akari runs away from Ruby because of her troubling relationship with her. Ruby begins to think that Akari is not the sweet girl as she thought, but seeing her shyness in class, and her fear of not being able to have friends, makes her understand the whole situation. Later that evening, Akari returns home and feeling sad for what happened in the morning, and saw Ruby in her bedroom who is bursting into tears. Ruby tells Akari that she wants to help her and become her partner. Akari then accepts and Ruby returns to being happy and became friends for life. Ruby gives Akari her Jewel Charm to strengthen their friendship. She then brings Akari to Jewel Land; applying for her to become a student of the Magic Academy.

In episode 3, they meet Labra, who eventually becomes the secondary partner of Akari.

Ruby is Kanon's partner, roommate, and a member of the Plum class. Like Kanon, Ruby has a crush on Mikage. The two girls often compete against each other for his love. Due to their frequent indifferences, they often fight each other in many circumstances. Still, Ruby trusts Kanon as her companion. But upon hearing Kanon and Mikage are related, Ruby started to feel more empathic for her. In the last episode, Mikage transforms into Granite and the two reunite with each other 5 years later in the end, becoming a couple.

Ruby is Pink's partner and the owner of the Kira-Kira Shop. Alongside the KiraDeco 5, Ruby and her friends have to gather Deco Stones to save the earth, as well as Jewelina and Jewel Land.

Ruby is Chiari's partner and member of the Jewelpet Café Happiness to find Magic Gems with her friends. She meets Chiari, Nene, and Ruruka while she and the others see the Jewelpet Café Happiness in bad conditions, Ruby explains to them on what exactly happened while preparing the café. Because of this, Chiari and her friends decide to help them and repair the place, also helping them find the Magic Gems. Ruby first forms a Magic Gem with Chiari in the second episode; when Chiari finds the Jewel Box, and forms her secondary Magic Gem in episode 16.

Ruby is Momona's partner and mentor. Ruby has chosen Momona to become the next Petite Lady candidate by having her transported to Jewel Land. There, she introduces herself as her mentor to become the next Lady Jewel. Throughout the series, Ruby helps Momona on her way to becoming a Lady.

Ruby is one of Airi's partners along with Labra, Luna, and Larimar. During the day the Jewel Castle fell into the Human World, she was partnered up with her friend and rival Luea. But during her expedition, Ruby got separated from her and wandered around the world on her own.

Ruby eventually got lost on her way to the Jewel Castle and runs into the young Airi. Excited to meet a real Jewelpet, Airi urges her to show her some real magic before she goes to sleep. She agrees to demonstrate her magic, but due to her inexperience, she accidentally knocks out Airi instead.

Ruby went missing later on and Larimar, Labra, and Luna were sent out to find her. With the help of Airi, the girls were able to find Ruby and the two reunite after a few years. Now, together with her long friend Airi and her Jewelpet friends, they embark on weird adventures as they train their magic to help save the Jewel Castle.

Ruby is one of the main characters who struggles to get Jewelpet back on air, along with Labra and Ruri.

Ruby is one of the first Jewelpets to enter Sweetsland for Princess Mana's birthday and the primary protagonist of the movie; along with Garnet, Sapphie, Labra, Angela, Sango, Charotte and Jasper. 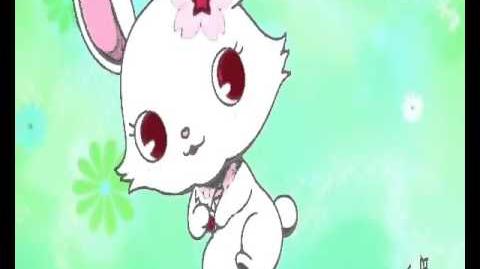 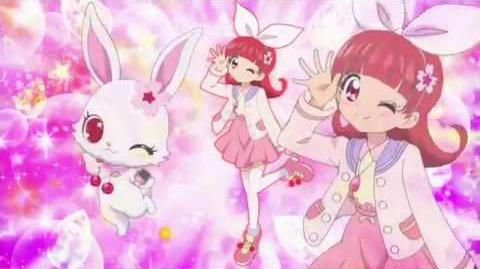