Sapphie (サフィー, Safī?) is a female Cavalier King Charles Spaniel Jewelpet who represents Friendship and one of the three mascot characters of the Jewelpet franchise. She is the second Jewelpet in the roster overall.

Sapphie is a Cavalier King Charles Spaniel dog with lemon yellow fur and cornflower blue ears. Her Jewel Eyes are made out of blue sapphires. For her attire, she wears a light pink and light blue flower garland on her head and a white pearl necklace with a blue treble clef note-shaped sapphire jewel attached around her neck.

In Jewelpet Sunshine and Jewelpet Happiness, she can occasionally be seen wearing a white professor's cloak and/or a pair of glasses which is colored purple (in Sunshine) or red (in Happiness).

Sapphie's Jewel Charm is egg-shaped and colored blue. It is embedded with a dark blue star-shaped sapphire and four small round dark blue sapphires surrounding it. It is also decorated with white-gold trimmings.

In her human form, Sapphie has sky blue hair tied into two ponytails, just like her ears. She wears a pink vest which has two blue ribbons on both short sleeves and a light blue skirt. She also has a hairband which looks very alike to her garland. The thing that seems to stand out most about her human form is that her long yellow tail is kept, which does not occur with the other Jewelpets.

According to the official website, Sapphie is quiet, smart, kind and loves to look at the outside world from the windowsill.

Sapphie is also the most responsible and most studious, taking place in charge to see her plans come to life.

As the Jewelpet of Friendship, Sapphie's magic can allow humans to befriend anyone with ease. In her official setting in the franchise, Sapphie's power also includes gaining intelligence and calm judgement, as well as the ability to see beauty.

Despite her personality, Sapphie has the highest magic ranking of all Jewelpets: "Crystal Class", since all of her magic is considered successful when casted. Though a few Jewelpets have this class, Sapphie is considered to be the most studious of the three and also has good skills in inventing and creating experiments. Usually, she relies mainly on both science and magic in all of her studies.

Sapphie can also wield a miniaturized version of the Jewel Stick for her magic or with Ruby and Garnet, to summon other Jewelpets from Jewel Land. In Jewelpet Kira☆Deco!, she wields a Jewel Pod, which she will consider decorating it with a Philosopher's Stone.

Sapphie formally appeared in the very first episode alongside the other Jewelpets, who is being turned into a Jewel Charm so she can rest in the Dream Forest. However, like the others, she became lost in the human world when the charms themselves were spilled by a strong gust of wind.

Her true debut is in episode 3, on where Rinko and Minami see that Aoi is holding her charm, though she's eventually unaware that it contains a Jewelpet inside (which is Sapphie herself). In a desperate search, Rinko and the two Jewelpets went to her mansion and had a little talk with Aoi, convincing her that she has friends and Rinko wanted to be her friend before she leaves. Though Aoi was saddened when she found out that Ruby and Garnet are spying on her room after they saw Sapphie's Jewel Charm.

The next day, Rinko, Ruby, Minami, and Garnet rushed to the airport and try to convince Aoi to stay. With no options left, both Rinko and Ruby awakened Sapphie from her Jewel Charm state and convinced Aoi that Sapphie's magic can guarantee her to make her have friends. After she agrees, Sapphie casts her magic and hilarity ensues, though it made Aoi happy and finally leaves Japan. However, the next day, Aoi returned to school and decided to stay with Rinko and Minami and agreeing to search for the rest of the lost Jewelpets.

Sapphie is the partner of Sara, a girl she met as a child that lived all by herself after her parents left.

Sapphie is one of the students of the Sunshine Academy, and a biologist who owns a secret lab in this series. Nejikawa, a robot who has a crush on her, follows her into her secret lab and Sapphie ends up letting him stay with her.

Sapphie is the partner of Kiichi Furano, who is a member of the KiraDeco 5. She owns a library and a tree that grows food for her to eat. She often teaches at the school due to there being no teacher, until Coal takes over in the form of "Coarumi". Kiichi stays with her for the time being while everyone tries to get all of the Deco Stones to save Jewelina from her stone imprisonment. During her quest, she is determined to wield her Jewel Pod with a Philosopher's Stone; though she is never seen actually obtaining one throughout the series' run.

Sapphie is one of the workers of the Jewelpet Café Happiness, and the partner of Nene Konoe. In episode 3, Sapphie is having a hard time in the café. Meanwhile, Nene brought both Ruby, Ruruka, and Chiari to one of the department stores owned by her family. She told them that the store she's managing had a hard time due to her renting the place and is needing renovation. Chiari noticed the statue in the middle of the room in which Nene's father ordered it from France and noting its weirdness. At the library, Nene is still studying about managing a business, having no luck as Sapphie appeared with the same intention. As both of them had the same ideas, Nene's father messaged her about the mall as Sapphie knew what she is thinking, both of them decide to do a breakthrough in their business. Sapphie helps Nene to remove the strange statue, and their bond forms a Magic Gem. She forms a secondary Magic Gem with Azusa-sensei in episode 6.

Sapphie is the partner of Charon, a very timid girl, whom she helps her become a Lady.

She makes her first appearence in Episode 16a.

Sapphie retains her intelligent and inventive personality. She made her appearance on episode 2, suggesting her contribution to getting Jewelpet back in the anime series. Later, she and the Jewelpet gang get a cooking show gig and Sapphie showcases her special microwave invention but ends in a disaster when Ruby tries overloading it.

Sapphie is one of the first Jewelpets to enter Sweetsland for Princess Mana's birthday, along with Ruby, Garnet, Labra, Angela, Sango, Charotte and Jasper. 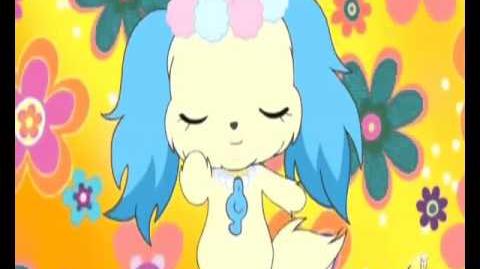 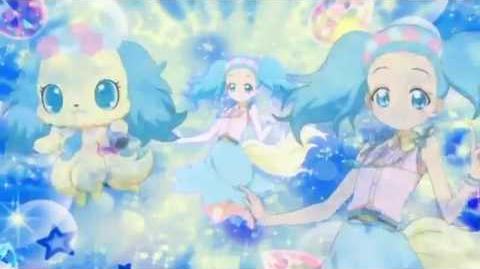